Public opinion polls showing Kentucky Gov. Matt Bevin as the least popular governor in the country with a 52% disapproval rating (Morning Consult) confirm what we hear from our 114,000 Working America members of all political stripes. Kentucky voters are ready for a change.

Democratic Attorney General Andy Beshear is in for a competitive race. Despite Bevin’s low approval numbers, the Cook Report currently rates the 2019 governor’s race as a “toss up.” Politico reported that Bevin’s re-election prospects have Trump’s team sweating and fearful of an embarrassing loss in a deep-red state.

To prevail this fall requires Democrats to both build large margins in relatively progressive urban communities like Louisville and Lexington, and to reclaim votes in smaller cities like Owensboro, Paducah and much smaller towns across the state.

Using the last gubernatorial contests as a starting point, we anticipate a 2019 electorate of approximately 1,062,000. However, should the enthusiasm present in the 2018 election continue this year, total turnout could rise to as many as 1,307,600 ballots.

The historical Democratic vote deficit is substantial. For example, in 2015, Bevin won by 84,754 votes. However, in 2019, the election context is different nationwide and in Kentucky. Democrats have been outperforming Republicans nationwide and successfully unseating unpopular Republican governors in numerous races.

To beat Bevin, progressives will need to use a number of evidence-based tactics, including field, digital, mail and voter turnout targets. Our analytic targeting models have identified between 540,000 and 800,000 persuadable voters in the 2019 electorate. If contacted, these voters will swing at least 33,000 votes from Bevin to Beshear.

In this brief, we give an overview of where in Kentucky progressives can find persuadable voters, why working-class voters in Kentucky are the key constituency to winning the gubernatorial election, and what it takes to win them over.

Where Are Voters Most Persuadable?

Over the past decade, Working America has partnered with a number of political scientists to conduct dozens of clinical experiments that measure the persuasive impact of an interaction with a Working America canvasser. The data from these experiments were used to build this nationwide general election persuadability model.

On a scale of 0 to 100, each registered voter is scored based on the likelihood he or she will change their vote choice conditional on a face-to-face conversation with a Working America canvasser.

In the heat map below, we predict the density of persuadable voters in Kentucky’s 120 counties.

The key to beating Bevin in November is raising the margin of victory in the Louisville (Jefferson County) and Lexington (Fayette County) media markets, as well as bringing back swing voters in smaller cities.

Two-thirds of the state’s ballots come from the large metros Louisville (32.7%) and Lexington (29.4%). The unsuccessful 2015 Democratic gubernatorial candidate, Jack Conway, won 50.8% of the Louisville vote and 41.6% of the Lexington vote. By comparison, in 2007, former Democratic Governor Steve Beshear won 61.36% of Louisville and 54.65% of Lexington voters. Turning out more of the regions’ Democratic voters and moving a large number of persuadable voters to support Beshear will result in a statewide victory if the Democratic ticket can maintain its existing vote share in smaller communities across the state.

Progressives also need to reach voters in smaller cities outside these media markets where a face-to-face conversation can help increase support among working-class voters. Cities like Paducah, Bowling Green and Owensboro are canvassable and could be the geographies that make the difference in this election. Nested in the bulk of these areas are state legislative targets that will be up in 2020. Building lasting engagement in these regions of the state will ensure that progressives have a foundation for long-term electorate movement. 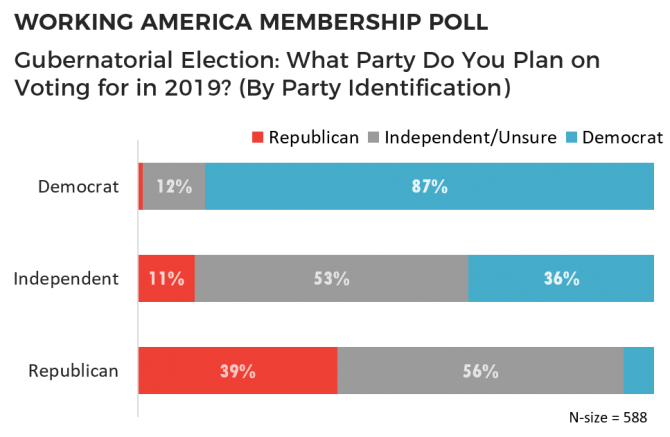 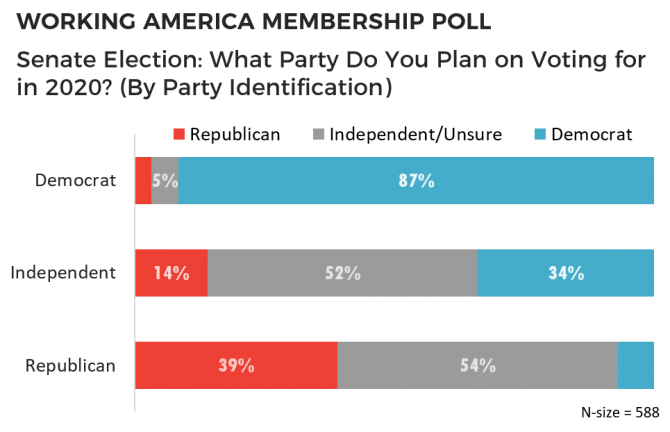 A February 2019 survey of Working America’s members shows that not only are independents up for grabs, but so too are Republicans. Bevin’s vulnerability is deep: Less than 40% of Republicans support a second term for him, Democrats are largely solidified against him, and independents are not likely to fill the gap in support.

Gov. Bevin isn’t alone in unpopularity in the state. Our member survey found that these voters—Republicans, Independents and Democrats—equally disapprove of Republican Majority Leader Mitch McConnell, jeopardizing his reelection prospects in 2020. A recent Morning Consult poll found that McConnell is the least popular senator in the country.

But that doesn’t mean the GOP brand is entirely in trouble. President Trump still remains very popular in the state, so the Republicans will attempt to nationalize the governor’s race in order to leverage enthusiasm for Trump. In Bevin’s first television campaign ad of this election season, Bevin is featured alongside Trump. Bevin also can self-fund and has switched running mates in an attempt to pick up momentum. 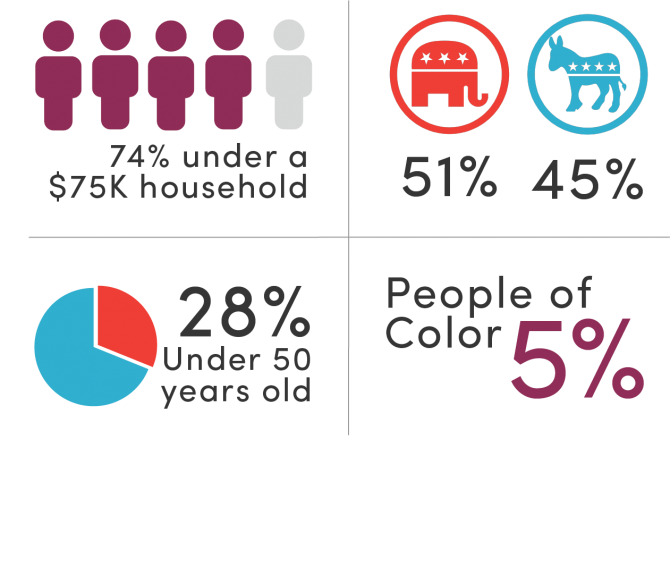 How to Win Working-Class Voters

Based on national political trends, states like Kentucky might seem like they should be a slam-dunk for the GOP. Yet our conversations with voters across the country demonstrate that once you overcome disaffection through a face-to-face conversation, you can have productive discussions on the issues with all kinds of voters.

Looking ahead, here’s which issues progressives should focus on when engaging working-class voters. 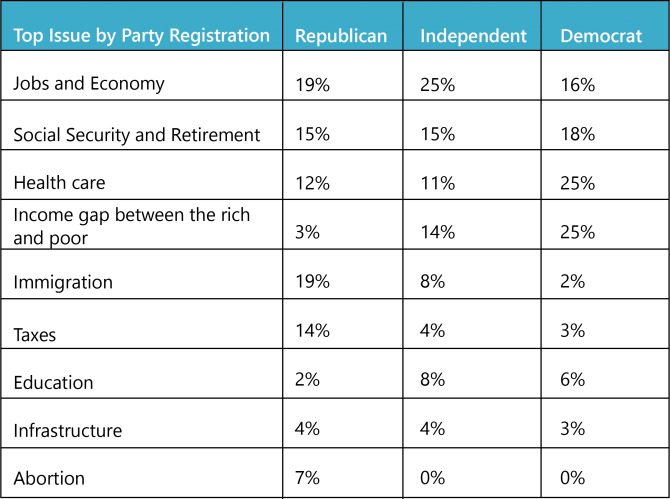 In order to defeat Gov. Bevin, progressives need to localize the election and speak to the kitchen-table issues that are top of mind for voters. Kentuckians—regardless of partisanship—prioritize issues such as jobs and the economy, social security and retirement, and health care. Partisanship appears in different issues like immigration, taxes and income inequality.

Based on our work in Kentucky, the clear lesson was that while the state’s voters are politically complex and often show cross-partisan preferences, they respond when presented with practical information.

For example, even the most stalwart Republican voters will take exception to plans to curb Medicaid expansion when they understand that Medicaid increases access to treatments for opioid addiction. By focusing Kentuckians on the consequence of cutting health care, voters will be reminded of the misdeeds of Gov. Bevin both now and in November.

Make the Economy Work for Everyone

Working-class people realize that they aren’t getting their fair share of the economy. In a recent survey of our members in Kentucky, almost half of the voters we surveyed told us they thought the economy is heading in the wrong direction. Beshear  should talk about creating an economy that works for all Kentuckians.

Connect the Dots for Voters

Our current politics fail to engage working people in a conversation about what matters to them. Progressives need to draw connections between voters’ lived experiences and the reason they should cast a ballot in the first place.

Here at Working America, we found that we can get so much more if we start where the voters are. One of the most consistently effective ways to win votes in any community is through a smart, targeted field program.

These conversations cut through the noise of television commercials, talking heads and negative campaigning. Trained canvassers connect with voters on issues that are important to them, and they connect those issues to the upcoming election and the working-family candidate.

We’ve been successful because when we establish a relationship with voters at the door and sign them up as Working America members, we build a lasting presence in the community. This method allows us to continue communicating with voters before and after an election about issues impacting the Kentucky labor movement locally, statewide and nationally.

About Working America in Kentucky

With more than 3 million members nationwide, Working America reaches working-class voters via a professional canvass to mobilize them to fight for good jobs and a fair economy. In Kentucky, Working America has organized more than 114,000 members and been active in dozens of gubernatorial, state house and federal elections stretching back to 2007. Our face-to-face organizing efforts are informed by rigorous clinical analytics and the latest in machine-learning techniques, pointing to a wide swath of this year’s voters who are persuadable.

We continue to organize members around the issues they care about, including jobs and the economy, and protecting social security and health care. We believe it’s essential to set in place a roadmap for a large-scale and sustained political realignment that brings more working-class voices into politics.

“Strength in Numbers” Makes the Difference for Stop & Shop Workers