North Carolina’s 9th Congressional District is now infamous for the ballot-stealing operation carried out on behalf of Republican candidate Mark Harris. Given the flagrant, fraudulent behavior of Harris’ campaign, the North Carolina Board of Elections determined that the seat would remain empty, pending a special election on Sept. 10, 2019.

In this sprawling district, which covers suburban Charlotte eastward past Fayetteville almost to I-40, 54% of voters chose President Donald Trump in 2016. The new election will determine whether Republicans need a gain of 18 or 19 seats to reclaim a majority in the U.S. House in 2020. Indeed, who voters choose in this special election will serve as a bellwether for North Carolina ahead of the next presidential contest. Will Republican structural advantages persist, or will this race be a sign that Democrats’ dominance in 2018 will extend into 2020?

Working America has been on the ground in this district since July 15 to gauge the mood of both Democratic base and swing voters. We’ve held face-to-face conversations with 2,817 working-class voters in predominately African American communities across Bladen, Cumberland and Robeson counties, including 234 in-depth discussions. We explored how people are processing the current political moment, assessing their opinions about everything from jobs and the economy to health care to Trump’s job performance. We also gauged support levels for the two candidates in the special election.

Here’s what we found:

Voters are most concerned about jobs and the economy. 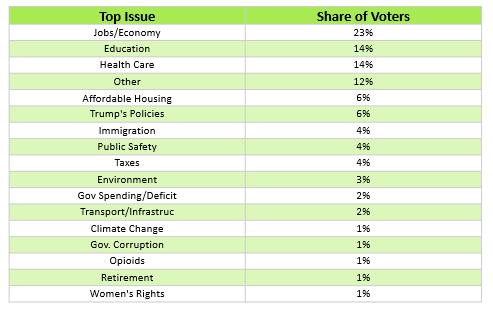 Dewayne, a 59-year-old Fairmont resident, said, “No one is fighting for jobs. They only talk about jobs at election time.”

Across the country, we’ve asked voters if they’re confident in their personal economic futures. In North Carolina’s 9th Congressional District, just 40% of voters told us they were confident about their economic prospects, among the lowest rate we’ve seen in areas including Ohio, Pennsylvania and Minnesota. 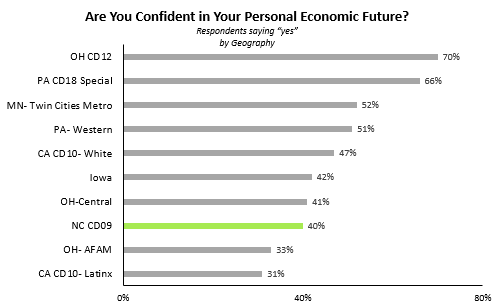 We asked voters a series of questions about jobs. When we asked if there’s been an increase in the number of jobs in the area, only 23% of voters said yes, compared to 56% who haven’t seen any job growth. 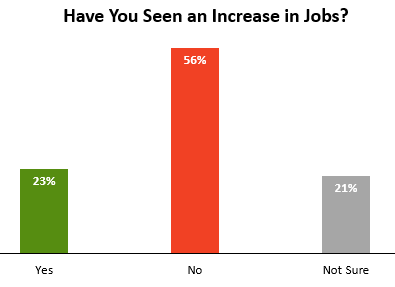 Put another way, the large majority of these voters were not feeling the job growth, despite reports of a booming employment market.

Among those who said there are new jobs, there was pessimism that may explain why so few people feel the job growth. Antoinette, a 47-year-old African American Cross Creek resident, is a veteran and air traffic controller. She said, “It’s hard to find employment here. If I did decide I don’t like my job, it’ll take me six months to a year to find something that pays just as much. There’s a lack of jobs here.” Washington, a 66-year-old African American Fayetteville resident and part-time therapist, said, “I’ve seen an increase, but [the jobs are] all low-level, or construction. People aren’t hiring full-time positions. It’s all 35 hours so they don’t have to pay benefits.”

We also asked whether new jobs have decent wages and benefits, and just 14% of the people we spoke with replied in the affirmative. When we asked what has happened to the average workers’ wages in the last decade, only 1 in 4 said they have increased, compared to more than half who believe they’ve stayed the same. All this, despite the fact that, from 2014 to 2018, wages in Bladen, Cumberland and Robeson counties have risen anywhere from 7.8% to 10.4%. 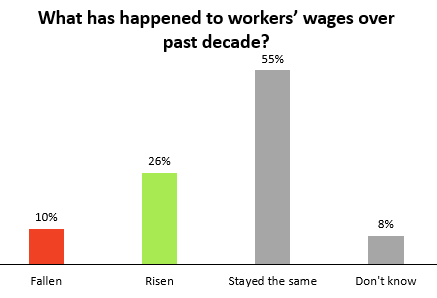 Earnest, an 81-year-old African American Fairmont resident, put it this way: “The economy was good here from the 1960s until about 2000. Now, ain’t nothing else here but fast food and the jailhouse.”

Voters identify a raise in the minimum wage as a way to help working people get ahead.

When we asked voters which solutions they thought would help working people get ahead economically, 46% identified raising the minimum wage, including 51% of black voters. 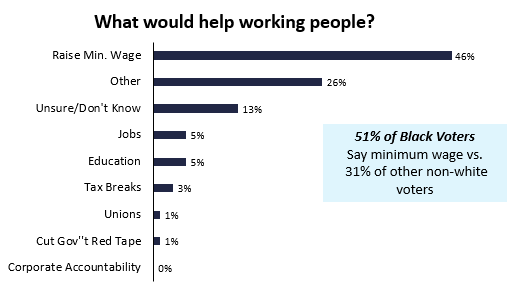 Joaquina, a 20-year-old African American Cross Creek resident with a young daughter, shared her struggles balancing child care and a job at McDonald’s. She said, “I had to quit because I couldn’t afford her day care. I didn’t pay and they kicked [my daughter] out. They still pay $7.25 an hour. The minimum wage is going up everywhere, but not here.”

These economic concerns are tied to broader disaffection with the political process. While the number of voters choosing “raise the minimum wage” as the solution to economic problems is at least somewhat attributable to the fact that more esoteric policy solutions aren’t top of mind for voters, it clearly indicates a desire for tangible policy wins that would directly impact economic conditions.

More than 6 in 10 voters don’t see the Democratic Party as any better than the Republican Party on the economy.

We asked voters to describe how their experience changes based on whether Democrats or Republicans hold power. While many of these voters cite economic issues as their overriding concern, fewer than 4 in 10 say that Democrats holding power affects their lives. A full 63% said it makes no difference who’s in power or that Republicans are as effective or better at helping their economic situation. 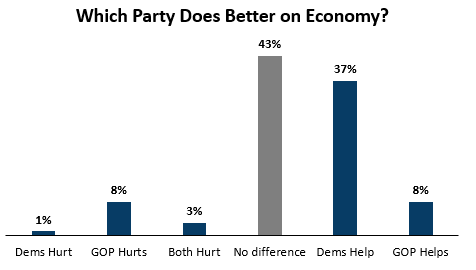 We heard similar sentiments in many of our conversations.

Ruth, a 50-year-old Fayetteville resident, said she didn’t trust any politicians, adding, “All of them are selling a dream.”

Robert, a 67-year-old Fairmont resident, said, “They all the same, where it’s one side or the other, they ain’t for poor people.”

Voters want candidates who will champion working people and fight on their behalf.

We asked voters, “When you think of an elected official who’s fighting for working people, who comes to mind?” Fully 55% said “no one” or “not sure,” and no politician garnered more than single-digit recognition.

These findings mirror results we’ve seen in other parts of the country. What do predominately white voters in western Pennsylvania or rural Ohio have in common with rural, Southern African American voters? A common belief that no one is fighting for them. 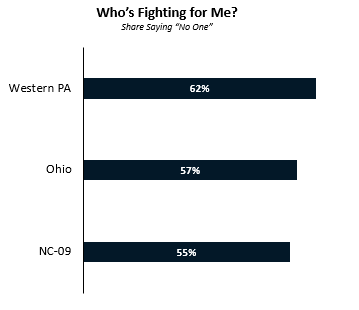 Progressives need to reach these voters in order to prevail this fall and in 2020. Of the people who did not vote in 2018, 60% said it was because of a bad candidate or because former President Barack Obama was not on the ballot. This presents a long-term risk to the Democrats. These voters are struggling, and traditional campaign communications aren’t convincing them that someone is fighting on their behalf.

When asked about how voter turnout could be improved, Angela, a 53-year-old African American Cross Creek resident, said, “Candidates need to come and talk to our community. I don’t have any of them knocking on my door like you.”

Despite some positive indicators, important warning signs for Democrats persist.

The promising sign for McCready is that it appears that Democrats are turning out at a significantly higher rate than Republicans, compared to the same point in the 2018 election, according to Working America’s canvass data and other external sources.

As shown in the graph below, Democrats’ share of all early voters is several points higher than at this point in the 2018 cycle. Republicans, on the other hand, are securing less of the early vote than they were at this point in 2018. 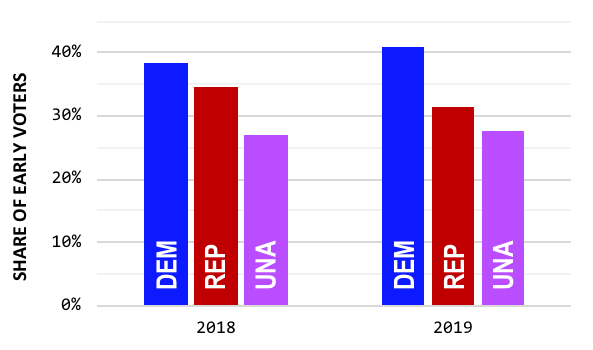 Nevertheless, when we examined the support levels for McCready among African Americans and Democrats who voted in the invalidated 2018 general election — the party base — we found that only 63% said they were backing him in this election, largely because of a lack of awareness about the contest.

A stark warning for turnout in this district is that, just days before the special election, more than 3 in 10 Democratic base voters do not identify as voting for the Democrat. 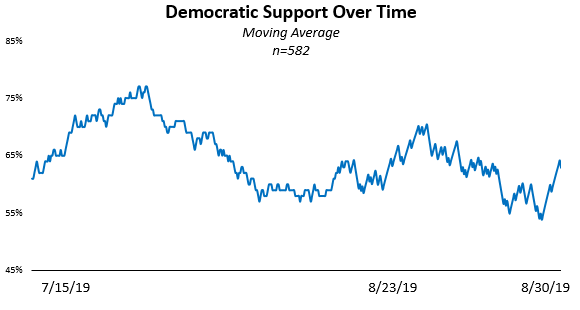 This level of indecision among Democratic base voters is troubling. We know from historical data that this indecision in the electorate is a sign less that voters will swing to the Republican side and more that they simply won’t vote. In a sample of 2018 Democratic voters (n=58,577), turnout was 80% for those who identified the candidate, compared to a turnout of 61% for voters who said they were undecided, underscoring the importance of consolidating the party base. Howard, a 61-year-old African American Fayetteville resident, said, “More people would vote if they knew their vote would count.”

What we heard from voters in North Carolina’s 9th Congressional District should be a wake-up call for every candidate. Among some of the Democratic Party’s core constituencies, we found a concerning level of political disaffection, with people fed up with gridlock and lacking belief that their votes make a difference.

Working America’s track record of winning in these types of communities suggests that overcoming cynicism is possible, but requires authentic, sustained engagement with voters. The voters we spoke with felt they are on the “outside” of political outreach and do not feel like anyone is connecting or even trying to connect with them. When we asked voters about a drop in statewide voter turnout, they themselves proposed face-to-face contact as a way to overcome apathy.

Our conversations in North Carolina echo those we’ve held across the country. Time and again, the same themes emerge — working-class voters feel powerless and don’t trust that politicians are even trying to bring about positive change. This cynicism and disaffection result in low voter participation and electoral volatility. Despite these challenges, there is a path forward. By connecting with voters on the bread-and-butter issues they care about, we can highlight how their real concerns could be addressed in the voting booth.

Jane Fonda: The only way to take our country back is one person at a time